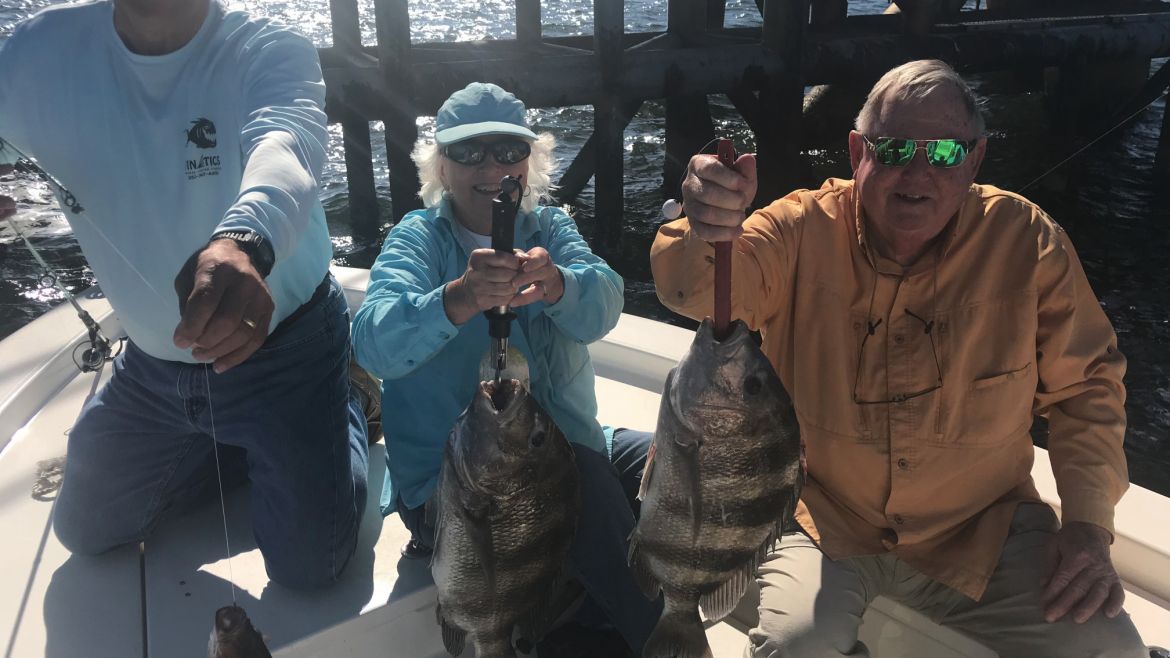 Anybody that knows me will tell you I get overly excited about Sheepshead fishing in and around Dauphin Island, AL. Opinions vary, but I don’t consider them a fish that can be caught regularly throughout the year. I solely target them during late February, March and April during the spawn.

Let’s start by talking about what a sheepshead actually is and where the name comes from. They are usually light grey or silver in color and during the spawn, can have a yellow tint to them. Five to six black strips are very prominent and have garnered the fish the nickname “Convict Fish” due to the similar look to the old prison outfits. I, for one use that nickname, not for the look, but because they are the best I’ve seen at stealing your bait. The greatest difference in this fish is its teeth. They are human-like to me, but it seems the name came from the similar look to a sheep’s mouth. This comes in handy while trying to crush and eat shelled prey and barnacles. Most of these fish range from one to eight pounds with the larger ones caught in the peak of the spawn.

This is a great charter to take if you’re not an early riser. Unlike Speckled Trout it’s not that important to be at the fishing spot at sunrise. This type of fishing is much more dependent on the tides, so we usually push off about 7:30 am.

What we look for is structure like docks, bridges, sunken wrecks and the gas rigs located all over Mobile Bay and just offshore, up to three miles. If we are fishing docks, a popping cork with a live or dead shrimp is the bait of choice, simply because you are very likely to also pick up a trout or redfish. Our main area to fish is the gas rigs. These are great because they hold tremendous amounts of bait and are completely covered in barnacles. A slip cork can be used to cover more ground and different depths, but I prefer to use a free line with a split shot weight attached about two feet above the hook.

As we approach the rig, there are two ways to use this setup. First, tie up very tight to the rig only leaving two or three feet between the boat and the rig. I use many different types of general garden tools to knock some of the barnacles off into the water, trying to create a feeding frenzy. Your captain will then hand each of you a rod with just enough weight to keep the bait straight up and down. You will be instructed to slowly move your bait up and down. This is because even though sheepshead are a large fish with a great fight, they have a very soft bite. I describe the feeling as if you’re hung on a limb. Once you feel this, pull slightly and when you’re sure it’s a fish, SET THE HOOK and hold on. Sometimes the hook will be just stuck in those large teeth we were discussing so it’s very important to not let any slack get in the line.

During the spawn, any range of bait will usually do, from live and dead shrimp to small crabs. I usually use shrimp, but like any other fish, sometimes they just get picky. That’s where hermit crabs come in. For some reason, even if they are not hungry, they can’t seem to resist them. So, just because you have not caught one yet, sometimes all it takes is switching up the bait.

Sheepshead have a 10-fish-per-person limit in Alabama and a minimum size of 12 inches fork length. As far as eating goes, it’s one of the best inshore fish you can have on the plate. You don’t hear about them a lot because of how difficult they are to clean and the amount of meat you get after cleaning such a large fish, but in my opinion, it’s well worth the effort. I personally don’t like fish with a strong, fishy taste. Sheepshead has really white meat with a sweat taste.

Just like any other charter trip, when we are done and get back to the dock, we will take photos with your catch. We’ll then clean, bag and ice down your catch to be enjoyed at home.